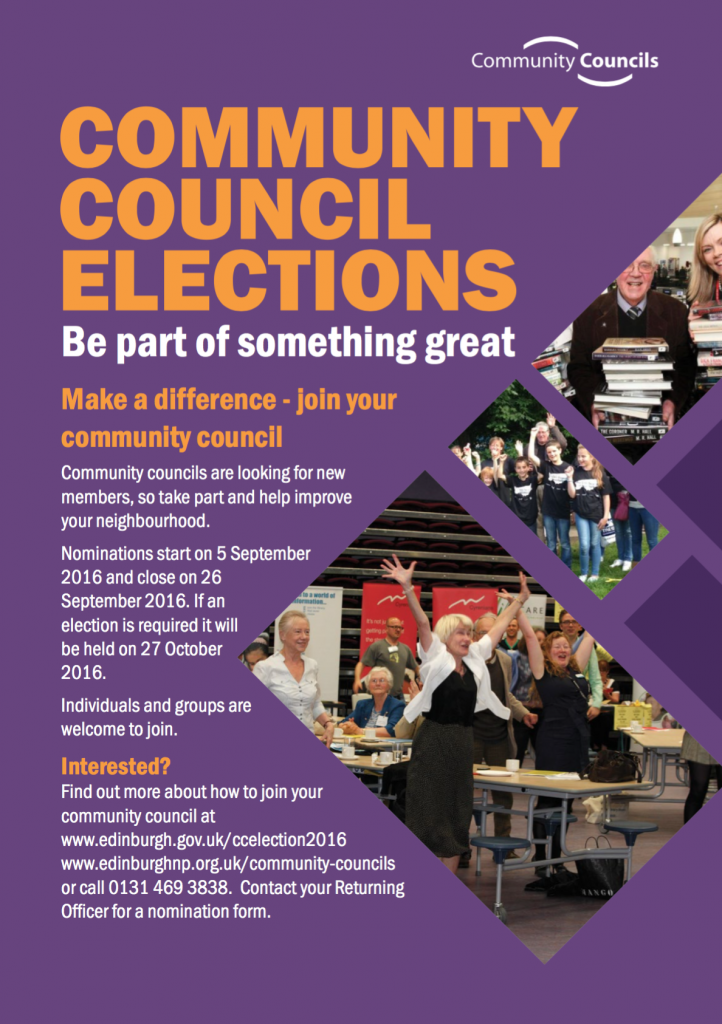 Community Councillors are elected every three years to represent local views to Edinburgh Council on everything from bins to planning to health and beyond – in fact most things that affect living in our local area.

Over the last year Tollcross has been involved with a wide variety of issues, and have represented issues from Tollcross to:

We have been involved in many consultations but have been unable to take part in all the consultations offered. Some examples include the Strategic Development Plan, Government review of planning, Planning for Student Housing, New Planning Guidance, cycling routes, meadows activities, public toilets, 20mph limits, police priorities, planning management, CEC budget consultation, overprovision and zoning of licensed premises, Fountainbridge Greenspaces etc etc.

With all this going in our Community Council of only 12 volunteers have achieved a lot in the last three years and we are now looking to seek new Councillors from the Tollcross area for elections in September/October of this year. If we get more than 12 nominations we go to a poll as below –

If you are interested in standing as a Community Councillor in Tollcross our next meeting will be on 31st August 2016, 7pm at Fountainbridge Community Centre (we do not meet in July or December).

The forms for nominations require two other people who are registered to vote in the Tollcross Community Council Area (See map at bottom of page) and we need more people to get involved!

This could be your opportunity to join a thriving group of local representatives and have a direct influence on local matters.

There are elections for all Edinburgh community councils this autumn. All current members will stand down – they are of course eligible for re-election.

All our meetings are open to the general public who live within the Community Council boundary.

Meetings are held on the LAST Wednesday of each month (except July & December). For the time being meetings are being held online, starting at 7pm. When the world gets back to normal, we will resume meeting in the Tollcross Community Centre 6.45 - 8.45pm.